Trade paperback reprinting the "Born Again" storyline from Daredevil #227-233. The on-sale date is the publication date reported in the U. S. Copyright Office filing.
This issue has variants: 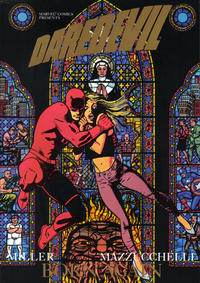 Text piece introducing the story and the artists.

David Mazzucchelli states in his interview in The Comics Journal #194 (March 1997) that his wife Richmond Lewis was the colorist for this issue. He said, "Richmond actually colored an issue of Daredevil that we did. The regular colorist was on vacation and I asked that it be given to me. It says that I colored it but that's only because I didn't want to go through the hassle of trying to convince people in one week that this woman who had never colored a comic book before was going to do a great job on it. So I said, 'Let me color it.' (47-48)

God and Country (Table of Contents: 15)

Daredevil In costume In last panel only

First Line of Dialogue or Text
It’s almost criminal how easy David makes it to write a script.

Text piece where Miller talks up David Mazzucchelli as an artist.

Illustration taken from front cover.
Price and barcode. Back cover.