This comic with identical cover and contents has gone through a number of reprints.
Sequel to Batman: Year 2 which ran in Detective Comics (DC, 1937 series) #575-578. 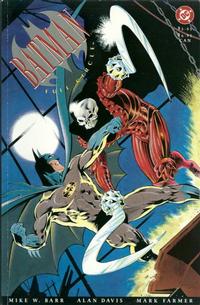 The front cover interior provides the creator credits for this publication. The backdrop is an image of the bat signal against gothic city spires.

First Line of Dialogue or Text
This is a very old story as Batman stories go.
Genre
superhero
Characters
Batman [Bruce Wayne]; Robin [Dick Grayson]; Penguin (cameo); Two-Face (cameo); Joker (cameo); Joey Chill; Miranda; Rhonda; Reaper [Joseph Chill]; Commissioner Jim Gordon; Joan Lincoln (cameo); Rachel Caspian; Marcia Chill; Joe Chill (flashback); Alfred Pennyworth; Leslie Thompkins; Thomas Wayne (flashback); Martha Wayne (flashback); McSurley; Moose; Profile; Judson Caspian (in photo)
Synopsis
The Reaper re-appears, but this time it is Joe Chill's son Joseph in the costume. Afraid her father has returned, Rachel Caspian heads to Gotham. Walking past the Wayne Foundation, Rachel runs into the Reaper. Batman saves her, but Chill manages to retrieve his father's gun. Working with his sister Marcia, Joseph kidnaps Rachel to use her as bait. Trapping Batman, the Chills use a psychoactive drug and a filmed re-enactment of his parents' deaths to try to drive the hero to suicide. But with a double-cross by Marcia and the help of Robin, Batman puts an end to Joseph's time as the Reaper.
Reprints

The back cover interior provides the publisher credits for this publication. The backdrop is an image of the bat signal against gothic city spires.

Synopsis with an image of the skull from the Reaper on back cover. White text and art on black cover. ISBN located bottom right edge.