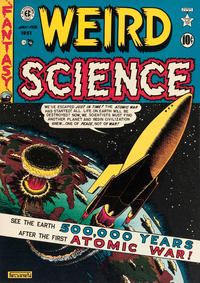 Made of the Future! (Table of Contents: 1)

Genre
science fiction
Synopsis
A man who gets dumped by his fiancee stumbles upon a group of travelers from the year 2150 who are sightseeing the 1950s. He accompanies them back to their time period and using their technology builds himself the perfect woman who he returns back to his time period with.
Reprints

Genre
science fiction
Characters
Zak; Albo; Professor von Kugon
Synopsis
A group of space travelers leave their own planet to visit a planet nine years away.....a planet that 500,000 years before was home to their own ancestors, and was plagued by constant warfare. When they land, they discover nothing has changed in all those years, as the planet faces yet another atomic war.
Reprints

Genre
science fiction
Synopsis
An old man with an abacus challenges the powerful super computer "Foto-Metritron-Tabulator" in a contest to see who can solve mathematical equations quicker.
Reprints

The Last War on Earth (Table of Contents: 5)

Genre
science fiction
Characters
Professor Harlow (death); Arthur (the professor's assistant, death?); Katey Mulrooney; Mike Flanagan; Pat Flanagan; Joe (newspaper worker);
Synopsis
Arthur is having a discussion with Professor Harlow, claiming that as long as man is alive on Earth, there will be wars. But the professor doesn't necessarily agree with that assertion. Arthur gives an example of how a group of people can band together to violently face a threat from the outside, and the professor conjectures that possibly a threat from outside the Earth would unite all nations together as one to ward off that threat, and possibly end war once and for all. That threat does come: from Mars!
Reprints
Keywords
United Press Service

The masthead reads: "...and now, let's tell you about The Last War On Earth".

Killed in Time! (Table of Contents: 6)

Genre
science fiction
Synopsis
In the present, a man accidently runs over and kills himself from 14 hours in the future.
Reprints

Kamen's then five year old son "helped" the art by defacing it with childish scrawls. Kamen then held Bart's hand and guided it to retouch the art. Kamen felt Bart deserved art credit.