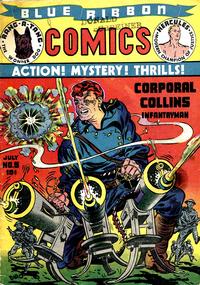 [The Madman of Mammoth Studios] (Table of Contents: 1)

Hercules Slaying the Hydra of Lerna (Table of Contents: 2)

[The Island of Baron von Krasner] (Table of Contents: 3)

[Breakout in the POW Camp] (Table of Contents: 5)

[Captured by the Dyaks] (Table of Contents: 6)

Originally credited Mort Meskin. Compared with his signed story in #6, this is not him, but George Storm. Compare also with Storm's story in Hangman #19, with long and lively inklines. He is credited on this feature by Jerry Bails' Who's Who.

[The Dispatch Robbery] (Table of Contents: 8)

[The Ulla-Boltyn Conspiracy] (Table of Contents: 9)