This issue is a variant of Incorruptible (Boom! Studios, 2009 series) #7 [Cover A]. There exist further variants.

Spokes' variant covers to #1-13 will spell out "Incorruptible". This cover features the U. 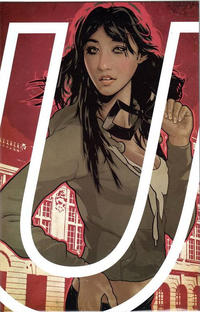 FBI Most Wanted Number One Fugitive (Table of Contents: 1)

The inside front cover has a recap of the story so far, credits, and indicia under a mock-up wanted poster listing Max Damage's vital statistics and a head shot of the character from Spokes' variant cover to #1.

Genre
superhero
Characters
Jailbait [Terri; full name unknown]; Lt. Louis Armadale; Max Damage; Annie [full name unknown]; members of The Diamond Gang
Synopsis
Annie shows up at the same hospital where Terri is recuperating and takes her Jailbait costume. Max goes after The Diamond Gang, "racial purity" punks who profess to follow the example of The Plutonian, but sleep deprivation is getting to him.

Story is untitled beyond series title. First line of dialogue: "Who's the girl, Lieutenant?"

The first issue of Hawks of Outremer and its 9-page preview in this issue are hyped with excerpt from cover art.

Nine pages of the story from Hawks of Outremer #1 are excerpted.

There Is a Great One Sleeping That Will Hear... (Table of Contents: 6)

The back cover promotes the ongoing series The Calling: Cthulhu Chronicles with art from the cover to #1.