Since Quasar was part of the Operation: Galactic Storm cross-over, but usually only available in the direct sales market, Marvel released newsstand editions of #32-34 labelled on the covers as #1-3 for the newsstand market so those buyers would not miss part of the story. This is a direct version of the newsstand version.
This issue is a variant of Quasar (Marvel, 1989 series) #32 [Direct]. There exist further variants: 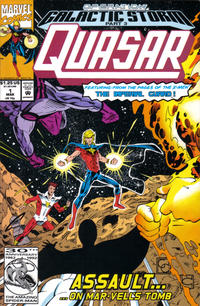 The Tomb of Mar-Vell (Table of Contents: 1)

Statement of Ownership (Table of Contents: 2)