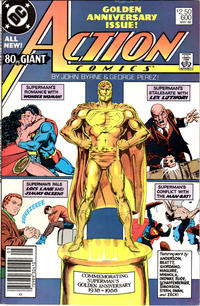 Job Number
G-3579
Genre
superhero
Characters
Superman [Clark Kent; Kal-El]; Wonder Woman [Diana]; Hermes; Myndi Mayer; Chrissie Fenton; VILLAINS: Darkseid; Desaad; Amazing Grace; Kalibak
Synopsis
Hermes summons Wonder Woman to Olympus from her romantic meeting with Superman, and the Man of Steel follows, but they arrive in different locations. After Hermes explains to Diana that Olympus has been taken over by Darkseid, the New God toys with the heroes, making them battle, as he discusses with Desaad his plans. When Superman and Wonder Woman find Darkseid and point out that he has conquered nothing as the Olympians abandoned their home, Darkseid sets off explosives throughout Olympus and leaves. But Olympus immediately regenerates and Wonder Woman and Superman return home as friends.
Reprints

Story continues from ADVENTURES OF SUPERMAN (DC, 1987 series) #440 and from WONDER WOMAN (DC, 1987 series) #16. Story broken up into chapters: "Chapter One: First Date...," pp. 1-7; "Chapter Two: Fallen Idols," pp. 8-12; "Chapter Three: Broken Mirrors," pp. 13-20; "Chapter Four: Battle!," pp. 21-24; and "Chapter Five: This Hollow Victory...," pp. 25-32. Darkseid tells Desaad that the Olympian gods are creations of the same energy released by the battle of the old gods that created Apokolips and New Genesis, though Circe describes a very different process of the generation of the gods in Wonder Woman #19 when she explains to Diana that the New Gods had their genesis in the energy released by the Titans conflict with the Olympians.

[Superman and Friends] (Table of Contents: 3)

A Friend in Need (Table of Contents: 8)

Story is continued in Sequence 10.

The Dark Where Madness Lies (Table of Contents: 10)

[Superman and Brainiac] (Table of Contents: 13)

"This one's for Jerry Siegel & Joe Shuster with thanks!"