This issue is a variant of Action Comics (DC, 1938 series) #844 [Direct Sales]. There exist further variants.

This reprint of the primary cover actually uses an expanded image with more content. This cover is zoomed in on a portion of that image with the signature moved and the entire cover is re-colored red. The second printing was announced on 2006-11-16. 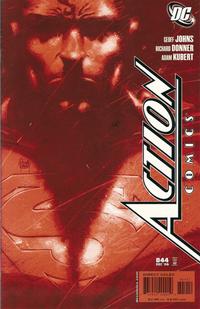 Genre
superhero
Characters
Superman; Jor-El (simulation); Perry White; Jimmy Olsen; Chris Kent [Lor-Zod] (intro, not yet named); Sarge Steel; Lois Lane; Lex Luthor (cameo); Jonathan Kent (cameo); Martha Kent (cameo)
Synopsis
Superman sees a ship landing and stops it from crashing. Opening it, he finds a boy. He takes the boy to the Department of Metahuman Affairs and its director, Sarge Steel, where the boy shows super-strength and speaks Kryptonese. The two talk and then Superman tells him he'll be back. In the morning, Superman finds the building empty. He goes to the Pentagon, and breaks in to confront Sarge Steel. Steel admits the boy is being transferred. Superman uses human means to stop the convoy, and spirits the boy away, taking him to his adoptive parents for advice on how to raise a boy from Krypton.
Reprints
Keywords
Fortress of Solitude

Richard Donner was the director of "Superman: The Movie" and a lot of "Superman II", which much of this story's elements are derived from. This is Donner's first comic book work.