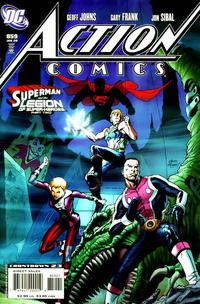 Superman and the Legion of Super-Heroes Chapter 2: Illegal Aliens (Table of Contents: 1)

Story continued from the previous issue, and continues in the next issue. Alien Holding Camp 6736 appears to be modeled on the first Legion Clubhouse (the upside-down rocket). The members of the Justice League were all former Legion rejects pre-Crisis, having been rejected in Adventure Comics #301, 320, 323, 331, and Superboy #218. Miss Niwtyn's full name is Ethel Lyn Niwtyn, also known as another reject, Eye-Ful Ethel. The Superman hologram on page 16 is an homage to the cover of Superman (DC, 1939 series) #1.