1 in 10 variant.
This issue is a variant of Adventure Comics Special Featuring the Guardian (DC, 2009 series) #1. 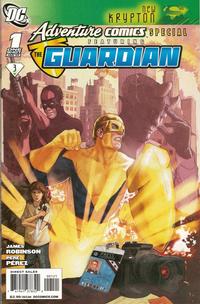 New Krypton Part Three The Worst Night of His Life (Table of Contents: 1)

Genre
superhero
Characters
Jimmy Olsen; The Guardian [Jim Harper clone]; Tellus (flashback); Guardian [Jim Harper] (flashback, dies); Gwendoline Harper; Eddy (flashback, cameo); Ron (flashback, cameo); Codename: Assassin (voice, flashback); Jim Harper clones (flashback); Paul Kirk clones (flashback); Cadmus
Synopsis
Jimmy Olsen has tracked down his old friend Jim Harper. Harper tells Jimmy how he found an alien (Tellus) being held by Cadmus, how he saw the original Jim Harper being killed, and how he found another cloning facility. The last one held clones of Paul Kirk and himself, and Harper was so disgusted that he destroyed them all. As a clone, he wonders if he even qualifies as a man; but Jimmy assures him that he is a good man. After Jimmy leaves, Harper remembers that he didn't kill all the clones; he rescued one small female clone (Gwendoline). He decides to go back to Metropolis.
Reprints