This issue is a variant of Action Comics (DC, 1938 series) #863 [Gary Frank Superman and the Legion of Super-Heroes Cover]. 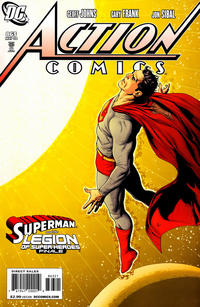 Superman and the Legion of Super-Heroes Chapter 6: Sun Rise (Table of Contents: 1)

Genre
superhero
Characters
Superman; Earth-Man [Absorbancy Boy]; Legion of Super-Heroes [Brainiac 5; Colossal Boy; Chameleon Girl [Yera Allon]; Sun Boy; Polar Boy (cameo); Shrinking Violet (cameo); Shadow Lass (cameo); Lightning Lass (cameo); Timber Wolf (cameo); Lightning Lad (cameo); Dawnstar (cameo); Ultra Boy (cameo); Night Girl (cameo); Cosmic Boy (cameo); Saturn Girl (cameo); Blok (cameo); Phantom Girl (cameo); Invisible Kid [Jacques Foccart] (cameo); Wildfire (cameo)]; Dr. Zoidberg (from Futurama)
Synopsis
In the 31st century, as the fight in Justice League headquarters continues, Earth-Man pushes a powerless Superman toward Earth, protected only by his flight ring. Superman's Legion colleagues free Chameleon Girl, and unhook Sun Boy from the machine. But the sun won't change until Sun Boy is awakened, which falls to Chameleon Girl. Earth-Man has destroyed Superman's flight ring in low Earth orbit, pushing him to plunge into the sidewalk in front of the old Legion headquarters. But as he approaches, the sun turns back to yellow, and he gets his powers back. He frees some aliens that were just rounded up, and scolds an officer for imprisoning them. But Earth-Man arrives, and uses the stolen Legionnaires powers to fight Superman. But the rest of the Legion arrives, and join the battle. Superman delivers the final blow, knocking out Earth-Man. He and the Legion then confront the invasion force, and convince them to stand down. As the Legion gets ready to return Superman to his time, he reminisces about the first time they did so, and he remembers not feeling so alone anymore.
Reprints

Story continued from the previous issue. One of the alien prisoners being rounded up on page 6 appears to be Dr. Zoidberg from the "Futurama" TV show.