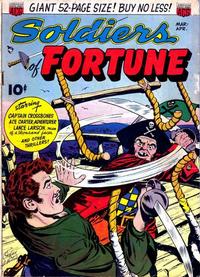 A Mission for the General (Table of Contents: 2)

The Sioux Massacres (Table of Contents: 4)

Based on true events.

The faces with many thin inklines on page one, and the inklines on cheeks in sideview, and peculiar lines inside ear in second panel on page two, are signs of Moritz.

Gamble against Odds (Table of Contents: 5)

Genre
adventure
Characters
Richard Burton; Isabel Arundel; Grand Emir of Harar
Synopsis
The story of Richard Burton and his adventures, including being the first white man to see the sacred Moslem ceremonies in Mecca and discovering lake Tanganyika.

The Man of a Thousand Faces! (Table of Contents: 8)

Originally credited to Edmond Good, like the "Sioux Massacre", even if the artwork is very different. The best to compare with is the Charles Sultan story in "Adventures Into the Unknown" #25. There the many close up faces in side view are identical both in layout and inking to this one. Some of the many smiling faces in close up, with heavy jaw and chin, especially in sideview on page 7 are very much like Paul Gustavson, except the inking, but with Sultan it all fits. Anyway, it is NOT Edmond Good. His faces are more rounded and with bright eyes and lips like Johnny Hazard.