Look Out, Archie! Raj & Betty Are Falling in Love in India! (Table of Contents) 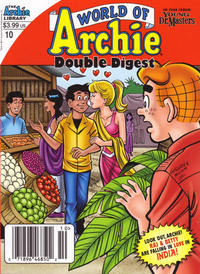 Genre
humor; teen
Characters
Dilton Doiley; Mr. Weatherbee; Jughead Jones; Archie Andrews
Synopsis
Dilton comes up with a design for a float for the parade, and all goes well until Archie is involved.
Reprints

Credits from the printing in Archie's Story & Game Digest #12.

What's for Breakfast? (Table of Contents: 17)

Spaced Out (Table of Contents: 19)

Illustration that introduces the next section of Josie reprints.

Nothing but the Tooth (Table of Contents: 29)

As Carlos Antunes worked for Archie after 2000 and Bill Vigoda was no longer working there the assumption is that Carlos Antunes recolored this story from the original printing.

The Secret Behind the Mask (Table of Contents: 30)