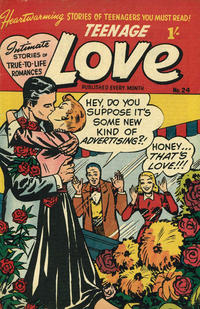 Nobody Must Know! (Table of Contents: 1)

This is possibly the story also reprinted in Hi-School Romance (Harvey, 1949 series) #61 (March 1957), although that text story is reported as only 2/3 page.

He Loved Me Not (Table of Contents: 2)

My Heart's Desire! (Table of Contents: 3)

First Line of Dialogue or Text
Agatha--bet you're a girl scout if this is your name!
Genre
non-fiction
Synopsis
Information about the meanings of the names Agatha, Sarah, Rosalind, Margaret and Judith.

This story might be from Love Problems and Advice Illustrated (Harvey, 1949 series) #12 (November 1951) -- although it is likely "What's in a Name?" was a feature title used in several occassions.

I Was a Failure on My First Date! (Table of Contents: 7)