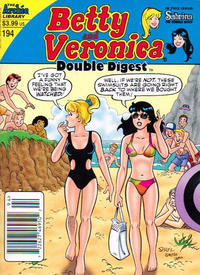 The Big Puzzle! (Table of Contents: 2)

First Line of Dialogue or Text
I can't wait to get back to civilization.
Genre
humor
Characters
Betty Cooper; Veronica Lodge
Synopsis
Betty and Veronica camping with Veronica's servants.

Genre
humor
Characters
Veronica Lodge; Hiram Lodge; Hermione Lodge; Betty Cooper; Jughead Jones
Synopsis
Veronica dreams that her family has lost all their money and they have to live like regular people.
Reprints

About Face (Table of Contents: 10)

The Nose Knows (Table of Contents: 15)

Genre
humor
Characters
Betty Cooper; Veronica Lodge; Miss Grundy; Professor Flutesnoot; Chuck Clayton; Archie Andrews
Synopsis
Veronica blindfolds Betty to see if she can figure out where she is in the school with just her sense of smell.
Reprints

Genre
humor
Characters
Archie Andrews; Betty Cooper; Veronica Lodge; Jughead Jones; Reggie Mantle
Synopsis
Since Archie always ends up with an excuse for breaking their plans, Betty makes him sign a contract to take her to the craft show.
Reprints

Used as the title page for the next section featuring Ginger reprints.

When this is reprinted in The Best of Archie Comics (Archie, 2011 series) #2, it is credited to Harry Lucey.

A Feudal Attempt (Table of Contents: 36)

Study as She Goes (Table of Contents: 39)

The Mystery of History (Table of Contents: 40)

This printing credits writing to George Gladir, pencils to Jeff Shultz and inks to Rich Koslowski. A later printing of this story in Betty and Veronica Double Digest Magazine (Archie, 1987 series) #256 has the credits changed to writing by Bill Golliher and Dan Parent, pencils to Dan Parent and pencils by Alison Flood.