On sale date from the publication date found at the Catalog of Copyright Entries, Part 3, Periodicals, New Series, Volume 35, 1940, Number 3. Class B periodical. Copyright number B 461255. 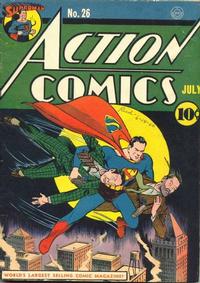 Penciling for Pages 1-5 was originally credited to Wayne Boring and later attributed to Don Komisarow by Bob Hughes. It has since been determined by Bob Hughes and Jon Wilson to have been done by Paul J. Lauretta.

Includes a one-panel plea after the end of the story for contributions to President Roosevelt's Infantile Paralysis Fund.

[Trapped in the Snow] (Table of Contents: 7)

Genre
adventure
Characters
Pep Morgan; Pierre
Synopsis
On a hunting expedition to Saskatchewan, Canada, Pep and his friend Pierre are snowed in and must traverse hundreds of miles to get to the next outpost before another storm.

Genre
historical
Characters
The Black Pirate [Jon Valor]; Captain Courtney; Jeanne; Captain Ruff's brother (villain)
Synopsis
The Black Pirate is trapped in a shark-infested sea. After fighting them off, he is picked up by another ship, run by Captain Courtney. When they dock at Savannah, Jon Valor leaves town on horseback. He meets up with a childhood friend, Jeanne, at an inn. That night, a bearded intruder comes to the inn and demands the Black Pirate.

Genre
adventure
Characters
Three Aces [Fog Fortune; Gunner Bill; Whistler Will]; Ingrid Svensen; New Guinea natives
Synopsis
Looking for adventure in California, Gunner encounters a crying girl, Ingrid Svensen, in a diner. She needs an flight to New Guinea to retrieve pearls from on top of Devil Mountain, pearls that her father left to her in his will. Once there, the Three Aces have to figure out how to help Ingrid get the pearls.

Genre
adventure
Characters
Tex Thomson; Bob Daley; Miss X (introduction); Special Prosecutor Maloney; J. Vander Wallace; Lefty
Synopsis
Since Gargantua T. Potts joined the French Army, Tex and Bob find things pretty dull, but a phone call threatening death if they mix in with the new prosecutor, Maloney, gets them set on a new investigation. Maloney deputizes them to help sniff out rackets. Working on the case, they are helped by the mysterious Miss X.

Genre
adventure
Characters
Clip Carson; Marion Trent; James Trent; Villains: Jacques Frontenac; the "devil wolf"
Synopsis
Clip runs into Marion Trent in New York City and ends up helping her get to her father's cabin in the Hudson Bay area. Her father found a lode, and Jacques Frontenac and his spies are after the location.

The Jagtooth Gold Mine (Table of Contents: 18)

Genre
adventure
Characters
Zatara; Tong; Annette Devere; Francois Devere; Henri Jardine (flashback); Tony
Synopsis
Zatara and Tong are in the far north searching for the Jagtooth Gold Mine he has been commissioned to find. At a cabin beset by the plague, Zatara gives the inhabitants medicine and asks them about the mine. They say that the mine is guarded by a vicious man, Tony, whom Zatara will have to defeat to return the mine to his friend, Henri Jardine.