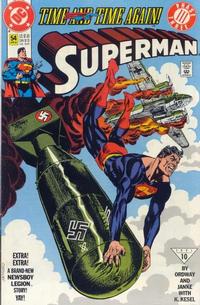 Job Number
G-5965
Genre
superhero
Characters
Superman [Clark Kent; Kal-El]; Lois Lane; Bibbo Bibbowski; Jimmy Olsen; Lucy Lane; Perry White; Alice White; Sarah Olsen; Max Frankt (first appearance; dies); Schlomo (first appearance); Sonia (first appearance); Mr. Z [General Zeiten] (villain); Nazis (villains)
Synopsis
Superman finds himself in Warsaw, Poland in June 1943 about to be hit by a Nazi train. Superman flies over the train, alerting some Nazi officers. He lands in the Warsaw ghetto where he notes that history has been changed. There, Superman discovers a plot involving General Zeiten regarding plutonium and atomic weapon experiments. Superman races to catch the train carrying the bomb. The Nazis, believing that the flying man could do more damage than all of Stalin's armies, decide to drop the bomb. Superman sees the bomb, catches it, and flies into space. He disappears in its massive explosion.
Reprints

Attack of the D.N.Alien! (Table of Contents: 3)

Genre
superhero
Characters
Guardian [Jim Harper]; Newsboy Legion [Tommy; Flip; Gabby; Big Words; Scrapper]; Dubbilex; Thomas Thompkins; Anthony Rodrigues; Walter Johnson; Shino Kurosawa; a D.N.Alien (Jimmy Olsen clone, villain)
Synopsis
In the Cadmus D.N.A. Project, a giant green Jimmy Olsen attacks the Guardian. The Newsboy Legion try to help Guardian, and Jimmy turns on them. Elsewhere in the project, Shino Kurosawa shows Mr. Barstow a clone-detector. They hear alarms and run outside. Jimmy Olsen's clone has stretched his arms around the Guardian, trapping him. Dubbilex saves the Guardian, but Jimmy's not out. He throws a door at the Newsboy Legion. The Guardian blocks it, and the Guardian follows Jimmy down a corridor that provides access to the Project's nuclear facilities, telling Dubbilex to stay with the boys.
Reprints