Serpent of the Sea!; Boomerang of Justice! (Table of Contents) 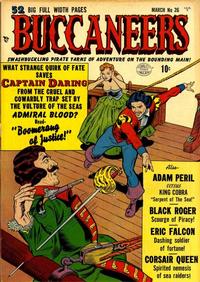 Boomerang of Justice (Table of Contents: 1)

Serpent of the Sea (Table of Contents: 2)

Blood on the Docks (Table of Contents: 4)

Genre
historical
Characters
Corsair Queen [Lila Evans]; Monk; Captain Rex (villain)
Synopsis
When their ship begins to flounder, Lila and Monk put into Corpse Cay, which is run by the nefarious Captain Rex, a buccaneer pirate who encouraged piracy for his own profit. Because Lila's father was killed by buccaneers, she has vowed to kill all such men....and Captain Rex will be no different.
Reprints