The Spectre now has white skin. 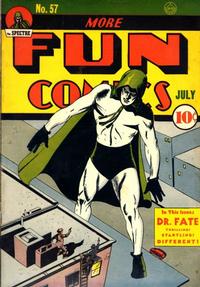 The Spectre next appears in a solo story in All Star Comics #1. Letterer credit added by Craig Delich.

For Thrills and Adventure Don't Miss This First Issue of All-Star Comics (Table of Contents: 5) (Expand) /

First Line of Dialogue or Text
Congo Bill and Professor Kent have escaped from the clutches of that fiendish criminal known as 'the Skull'...
Genre
jungle
Characters
Congo Bill; Professor Kent; The Skull; O'Toole (chimpanzee, introduction)
Synopsis
Bill is saved from the clutches of the Skull by a chimpanzee, whom he names O'Toole.
Keywords
crocodiles; lions; motor launches; pythons; treasure chests

First Line of Dialogue or Text
Desmo and his pal Gabby have had a series of adventures against a murderous group...
Genre
adventure
Characters
Captain Desmo; Gabby; The Society of Assassins (villains); The Grand Assassin (villain)

Genre
superhero
Characters
Dr. Fate [Kent Nelson]; Inza Kramer; Magno the Mighty (villain); Legions of the Styx (villains)
Synopsis
Dr. Fate follows up a lead when several men are discovered burned to death (with no outward sign) by the "Flame of Lambent."
Reprints

Dr. Fate has no gloves. Synopsis added by Craig Delich.