In its original run, page 6 of this comic contained the racial slur "Kike" which Comicraft blamed on a computer error; Marvel re-called the offending copies and re-issued the comic with the correct word "Killer" (although a number of uncorrected copies remain in circulation); Statement of Ownership average # of copies in preceding 12 months: 324,858.
This issue is a variant of Wolverine (Marvel, 1988 series) #131 [Direct Edition - Error]. There exist further variants:

Into Thin Air! (Table of Contents) 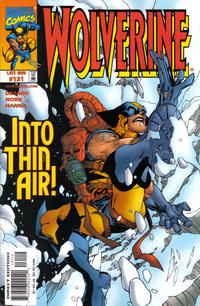 It Fell To Earth (Table of Contents: 1)