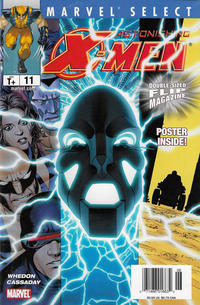 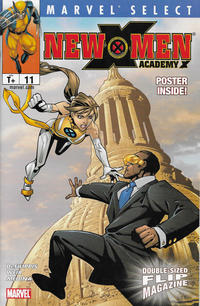 Too Much Information Part 2 of 2 (Table of Contents: 7)

Genre
superhero
Characters
New Mutants [Prodigy [David Alleyne]; Wallflower [Laurie Collins]; Wind Dancer [Sofia Mantega]; Elixir [Josh Foley]; Surge [Noriko Ashida]; Icarus [Jay Guthrie]]; Hellions [Hellion [Julian Keller]; Rockslide [Santo Vaccarro]; Mercury [Cessily Kincaid]; Tag [Brian Cruz]; Wither [Kevin Ford]]; Emma Frost [White Queen]; Dani Moonstar; Bishop; Storm; Tessa; Magma; Quill [Maxwell Jordan]; CAMEOS: Jeffrey Garrett; Cyclops; Wolverine; Iceman
Synopsis
With his mind opened up to absorb and retain all of the information of those around him, David has quickly risen to the office of president. The only problem is that he rules with an iron fist and destroys all who oppose him. The New Mutants and Hellions join forces to bring him down but the ensuing battle ends up blowing up the White House. Emma takes her hands off of David's head and the whole scenario turns out to be an illusion. David admits that he is not yet ready for Emma to remove the blocks in his mind. Kevin tells Josh to dump Laurie or he will tell her about his fling with Rahne.
Reprints

All appearances other than David, Dani, Emma, Josh and Kevin are an illusion in David's mind.