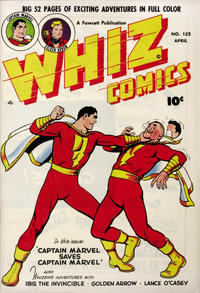 The Smash Hit (Table of Contents: 5)

The Worthless Ranch (Table of Contents: 6)

The stiff puppet-like movement of figures is similar to some of Cataldo's signed stories, so he may as well have done the pencil work too.

Some Nerve! (Table of Contents: 7)

The Mysterious Voyage (Table of Contents: 8)

Genre
adventure
Characters
Lance O'Casey; Mike Bellew (mate); Mr. Collins (dope runner)
Synopsis
Lance and his schooner are hired to search for a sunken treasure, which turns out to be dope.
Reprints

The Atomic Spy (Table of Contents: 10)

Too Smart for His Own Good (Table of Contents: 11)

Birthday on the Ranch (Table of Contents: 12)

Ibis the Invincible Battles the Earth Brain (Table of Contents: 13)

The artwork has many similarities with signed Walter Palais stories in Planet Comics (Fiction House, 1940 series) #52 and #53, such as hands, faces and figure movement.