Updated with information from atlastales.com.

The Man Who Died Twice! (Table of Contents) 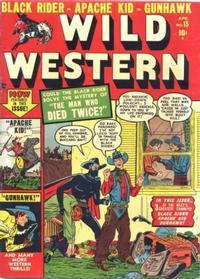 The Man Who Died Twice! (Table of Contents: 1)

The Lady and El Diablo (Table of Contents: 3)

How Gunhawk Got His Name! (Table of Contents: 5)

Script credits from Michael J. Vassallo, from the records of Clayton Martin via Clayton's family (posted to the Timely-Atlas-Comics, a Facebook group, on 12 April 2020).