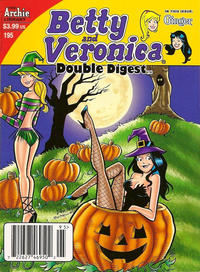 A Night to Remember (Table of Contents: 6)

Genre
humor; teen
Characters
Archie Andrews; Betty Cooper; Jughead Jones; Pop Tate
Synopsis
Archie thinks Betty is moving away from Riverdale so decides to give her one perfect night before she leaves.
Reprints

Chip Off the Old Block (Table of Contents: 12)

Out, Darned Spot (Table of Contents: 15)

Used as a title page for the next section containing Ginger reprints.

The People's Choice (Table of Contents: 21)

Spies and Dolls (Table of Contents: 22)

Genre
humor; teen
Characters
Ginger; Patsy; Ickky
Synopsis
When the girls go on strike from dating the boys dress Ickky up in a dress and send him to get information.
Reprints

The signature that appears in the original printing is absent in this printing.

Illustration used as a title page for the next section featuring Sabrina reprints.

In this printing the name of the cat is changed from Lucifer to "Luci!", leaving some extra blank space in certain word balloons.

Family Fight is a parody of the game show Family Feud.

For Veronica's Eyes Only (Table of Contents: 42)