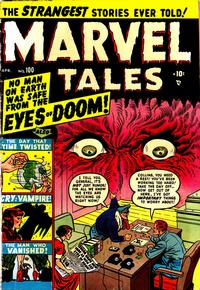 The Man Who Wasn't There (Table of Contents: 1)

This is the title at page top; at the end of the caption is a smaller title, “The Man Who Vanished!”

Eyes of Doom (Table of Contents: 2)

Job Number
7894
Synopsis
A brother brings home a vampire bat that he has captured from a cave. It turns into a beautiful seductress and hypnotizes him into introducing her to his brother, whom she desires as a mate. He warns his brother about her, but the brother thinks he is jealous and leaves. He reads up on methods for dealing with vampires and when the woman flies into a cave, he seals it with a cross, and shoots his turned brother with a silver bullet. He is convicted of murder and executed.
Reprints

The Strange Machine (Table of Contents: 5)

Job Number
7929
Synopsis
The leader of the Spanish Inquisition intends to do away with a rival by presenting a strange machine that will prove he is in league with the Devil. He climbs inside to investigate how the machine works, but fails to anticipate that his rival was building a device that would automatically implement every torture yet devised.
Reprints