The Girl of Steel! (Table of Contents) 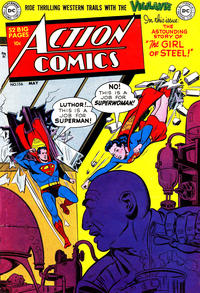 The Girl of Steel! (Table of Contents: 2)

Featuring a Supergirl who looks very similar to the Supergirl to arrive later in the decade. Lois Lane wears a blonde wig and a modified Superman costume with a blue skirt.

World of the Metal Men! (Table of Contents: 6)

Buzzy Says "Get It off Your Chest!" (Table of Contents: 9)

First Line of Dialogue or Text
Folks, would you mind being very quiet tonight?
Genre
humor

The Top of the World (Table of Contents: 16)

Genre
non-fiction
Synopsis
Article about the North Pole and the Arctic Region.

The Riddle of the Rainbow Man! (Table of Contents: 17)