Evolution Plus! (Table of Contents) 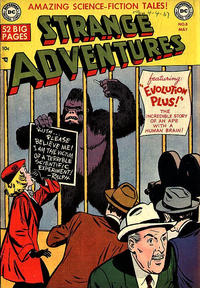 Evolution Plus! (Table of Contents: 2)

Genre
science fiction
Characters
Johnny Farrel; Ralph Gain; Ruth Gain
Synopsis
Scientist Ralph Gain invents a machine that can evolve animal subjects. His hoodlum friend, Johnny Farrel, accidentally kills him and uses the machine on himself, running up the evolutionary ladder until he finds himself devolved into a gorilla's form. He tries to convinced authorities that he is Gain but he slowly loses his mind and becomes a gorilla in thought as well as form.
Keywords
Cosmiray machine; evolution; gorillas

First Line of Dialogue or Text
$500.00 to Anyone Who Stays 2 Minutes with Battling Billy
Genre
humor; science fiction
Synopsis
A robot wins $500 in a wrestling contest but wants his winnings in gasoline.
Reprints
Keywords
filling stations; robots; service stations; wrestling

Lower half of the page between the Dubble Bubble advertisement and the Prof. Brainstorm filler.

On the upper 3/4 of the page between the Scien-test filler and the Wildroot Cream-Oil advertisement.

Revolt of the Humans! (Table of Contents: 11)

Genre
science fiction
Characters
Athor; Ilvra FL-24; the Machine; the Neos
Synopsis
In the year 8685, mankind is ruled by a supreme machine that provides for their every need. After a meeting with a Neo girl, Athon discovers that the rule of the Machine is not so benevolent and works to destroy it.
Keywords
machines