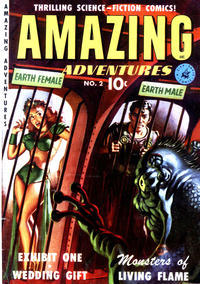 First Line of Dialogue or Text
Sometimes I wonder if I know what I'm doing!
Genre
humor; science fiction

On the inside front cover. Sequence added via the GCD Error Tracker by Ger Apeldoorn, who notes that this installment is not signed, but looks like the installment in the previous issue signed by Sahle.

Exhibit One (Table of Contents: 3)

The Warning! (Table of Contents: 4)

The Steel Monster (Table of Contents: 6)

The concept of the story is swiped from Theodore Sturgeon's famous science fiction story "Killdozer," which first appeared in Astounding Science Fiction pulp magazine in 1944. (James Walls, 2005-03-28, Per Sandell ed.)