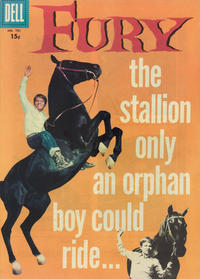 Genre
animal; children; western-frontier
Characters
Fury (horse) (photo of Highland); Joey Newton (photo of Bobby Diamond); Jim Newton (photo of Peter Graves)
Synopsis
Introduction of main characters and premise of the feature. This is kind of an "origin" story, explaining the relationship between Jim Newton, Joey, and Fury. The stories in the comic don't refer to anything promoted on the cover or this introduction.

Genre
animal; children; western-frontier
Characters
Fury (horse); Joey Newton; Jim Newton; Pete Wilkey
Synopsis
While Jim Newton in in the city selling 35 wild horses he has corralled, the herd is stolen by horse rustlers. When Joey tries to trail them on Fury, he is captured and taken blindfolded to the rustlers' hideout. The rustlers keep Fury, but leave Joey by a main road. Later, Joey tries to lead Pete back to the hideout by relying on the sounds he heard on the way while blindfolded.
Reprints

Pencils credit for this sequence from Alberto Becattini (May 14, 2007)

Genre
animal; children; western-frontier
Characters
Fury (horse); Joey Newton; Jim Newton; Pete Wilkey (cameo)
Synopsis
Tom Skobee, an old friend of Jim Newton's, asks him to come to his timber camp along Fox River and help him investigates a series of incidents that are sabotaging his logging operation. Jim takes Joey and Fury along as part of his "vacation."

Story continues on inside back cover in black and white and concludes on the back cover in color. The last panel is Dell's "A Pledge to Parents." Pencils credit for this sequence from Alberto Becattini (May 14, 2007)