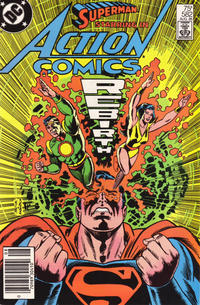 The Strange Rebirth of Jor-El and Lara! (Table of Contents: 1)