This issue is a variant of Dark Shadows (Dynamite Entertainment, 2011 series) #1. There exist further variants:

[Cover B] (Table of Contents) 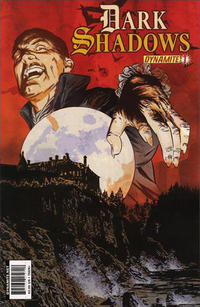 The story begins a few months after the events of the television soap opera, which ended on April 2, 1971.
Though Barnabas was cured of his vampire condition by that time, he is now under the curse again.

news about upcoming comics, including Dark Shadows #2 and Lord of the Jungle #1