Cannibals of the Deep (Table of Contents) 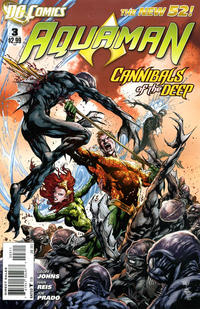 Genre
superhero
Characters
Aquaman [Arthur Curry]; Mera; Tom Curry (flashback); Trench creatures; Deputy Wilson; unnamed sheriff; Officer Gladstone; Commander Clay; Stephen Shin
Synopsis
After fighting off an attack of the mysterious sea creatures, Aquaman and Mera bring the body of one of the creatures to Dr. Stephen Shin, an oceanic expert with whom Aquaman has a strained past relationship, in an attempt to learn more about the creatures.
Reprints

Commander Clay is not identified by name until issue #5.

Red Hood and the Outlaws (Table of Contents: 5) (Expand) /

The Ray / promo (ad from the publisher) / 6 pages (report information)

A Hero's Destiny Is Fulfilled (Table of Contents: 9) (Expand) /