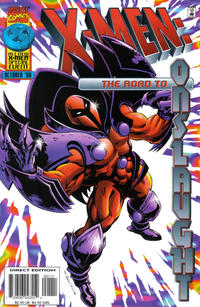 [The Road to Onslaught] (Table of Contents: 1)

Selection of reprinted pages and panels telling the events leading up to the Onslaught storyline, accompanied by text explaining the progression of ideas, as well as snippets of scripts, story proposals and outlines. This issue is well over 50% comic material as the story is told primarily through previously printed comic pages.