The Kid from Krypton! (Table of Contents) 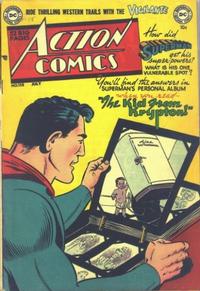 The Kid from Krypton! (Table of Contents: 2)

Genre
superhero
Characters
Superman [Clark Kent]; Lois Lane; Perry White; Jor-el; Lara; Jonathan Kent; Kane Korrel (villain)
Synopsis
When a meteor composed of kryptonite is poised to strike the town of Smithville Superman is stymied as to what to do. He knocks it away with a huge bolder but criminals track down the fallen object to use against him. Superman builds giant robots to help him get rid of the kryptonite.
Keywords
kryptonite; origin; robots; supermanium; uranium

Recap of Superman's origin and career. The kryptonite meteor is colored orange, not green.

The Vanishing Convoy! (Table of Contents: 6)

The Secret of Planetoid X! (Table of Contents: 9)

Genre
science fiction
Characters
Tommy Tomorrow; Brent Wood; John Rann (villain)
Synopsis
John Rann claims to have built a dangerous weapon so that the Planteers will take him to Planetoid X where they store all the outlawed weapons.
Reprints

First Line of Dialogue or Text
There's that new doll in my class...
Genre
humor
Reprints

First Line of Dialogue or Text
Ah, this is a nice spot on the beach...
Genre
humor
Reprints

First Line of Dialogue or Text
Which is more fattening...
Genre
non-fiction

The Prairie Troubadour Takes Over! (Table of Contents: 20)

Pencils and inks formerly tentatively attributed to George Roussos. Current art identification by Saltarella who states that most of the inks are Roussos, but it looks like Brown "inks on the face in the middle panels of page 3."

Look for the Real Reason! (Table of Contents: 21)