This issue is a variant of The Green Lantern Corps (DC, 1986 series) #208 [Direct]. There exist further variants.

[Come On, Proletarian over a Hero!] (Table of Contents)

Per Grigor Petrov, the cover art is in the style of a Soviet World War II propaganda poster, with a non-grammatical slogan, approximately rendered in the cover title field. 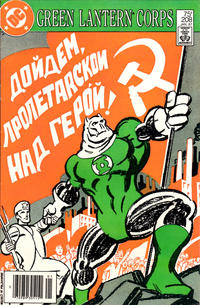