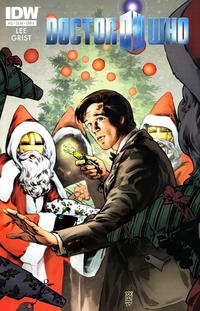 [Recap and credits] (Table of Contents: 1)

Credits, brief recap of who the Doctor is, and an illustration of the Eleventh Doctor and Santa peering out of the TARDIS.

Genre
science fiction
Characters
The Doctor; Santa Claus; Roboforms (villains)
Synopsis
The Doctor rescues Santa Claus from a group of Roboform Santas and then helps him deliver presents on Christmas Eve with the TARDIS.

This story is told completely without dialogue until the second to last page when the Doctor breaks the fourth wall and addresses the reader, wishing them a Happy Christmas. This moment is a tribute to the famous Christmas Day 1965 episode of the original TV series, The Feast of Steven (a standalone chapter of The Daleks' Master Plan), in which the First Doctor does the same thing, but on camera. Roboforms, androids usually seen dressed like Santa, were introduced in the 2005 Christmas special The Christmas Invasion. Due to the fact the Doctor breaks the fourth wall and meets Santa, it is doubtful that this story is considered canonical with either the IDW comic book series or the franchise in general.

IDW Publishing in December: Counting Down (Table of Contents: 4)

There's a New Planeswalker in Town! (Table of Contents: 7) (Expand) /