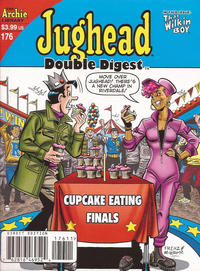 The Christmas Challenge! (Table of Contents: 2)

Checks and Balances! (Table of Contents: 9)

The Catalyst (Table of Contents: 16)

Genre
humor; teen
Characters
Jughead Jones; Reggie Mantle; Archie Andrews; Moose Mason; Veronica Lodge; Betty Cooper; Midge Klump
Synopsis
Jughead is wearing a Christmas wreath on his head, but he learns it's made of mistletoe when all the girls want to kiss him.
Reprints

One Question (Table of Contents: 28)

Genre
humor; teen
Characters
Betty Cooper; Jughead Jones
Synopsis
Betty asks Jughead if the light goes out in the refrigerator when you close the door.
Reprints

Pride of Riverdale (Table of Contents: 35)

Illustration used as the title page of the next section featuring That Wilkin Boy reprints.

This Is the Hour (Table of Contents: 44)

A Season to Remember (Table of Contents: 45)