Captain Kidd of the Congo (Table of Contents) 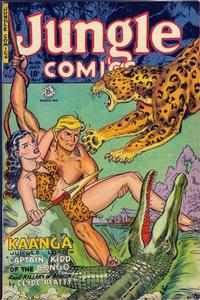 Captain Kidd of the Congo (Table of Contents: 1)

Personalities in the Big Cage (Table of Contents: 2)

First Line of Dialogue or Text
This is the story of the Densin brothers...
Genre
jungle
Characters
Tabu; John Densin; Byron Densin; Tomba
Synopsis
Tabu tells the story of the Densin brothers. The Densins are archaeologists, exploring ruins in Rhodesia. They find evidence that the temple is of Egyptian origin. Then they enter a room where a pharaoh is ordering the execution of a beast man. The pair flee.
Keywords
ancient Egypt; archaeology; cameras; Leica; Rhodesia; Temple of Zimbabwe

The story is left unended.

First Line of Dialogue or Text
Military Diary: Date October 18, 1951 --
Genre
adventure
Characters
Terry Thunder; Jim Reeves; Umbwangos (African tribe); Keeto; B'guli Dager; Terry
Synopsis
Terry returns to Fort Diablo and makes a visit to his mining friend, Jim Reeves. He is accompanied by Lieutenant Dager, who had been in command of the fort until Terry's return. Terry finds that Reeves has been imprisoned in his own mine by Dager and his girlfriend who are stealing diamonds. Terry frees Reeves and they overcome the thieves.
Keywords
diamond mining; leopards; pack zebras; saddle zebras; steamboats; Zambesi Point (geographical feature)

Pencil notes on Jim Vadeboncoeur Jr's copy (scanned at http://digitalcomicmuseum.com/preview/index.php?did=18104&page=28) indicates his belief that Battefield is the penciller.

First Line of Dialogue or Text
The jungle has a thousand trails...
Genre
jungle
Characters
Camilla; Warren; Ross; Hassim; Selima; Groot; Ali Kabrit
Synopsis
Trader Warren is ambushed by his nephews, hoping to prevent him from presenting evidence of their crimes to the district commissioner. Warren falls under the protection of Sheikh Ali Kabrit. The nephews kidnap the sheikh's daughter. Camilla rescues the daughter and captures the nephews.
Keywords
leopards; lions; saddle zebras; stereotypes of Arabs