Barnabas Collins Is Back! [Cover A] (Table of Contents) 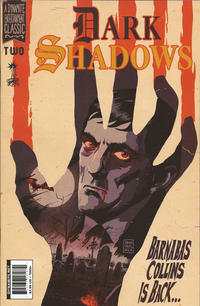 First Line of Dialogue or Text
The year is 1971. The place: Collinsport...
Genre
drama; fantasy-supernatural; horror-suspense

First Line of Dialogue or Text
On this night, a dark power has infiltrated the the great house of Colllinwood.
Genre
drama; fantasy-supernatural; horror-suspense
Characters
Barnabas Collins; Dr. Julia Hoffman; Carolyn Stoddard Hawkes; Roger Collins; David Collins; Elizabeth Collins Stoddard; Quentin Collins; Jack Harkins; Angelique
Synopsis
Barnabas and Quentin learn that the rest of the family has been possessed by Angelique, who is attempting to return from the dead.
Reprints

news about upcoming comics including Dark Shadows #3 and Ninjettes #1; also includes letters from readers on the previous issue