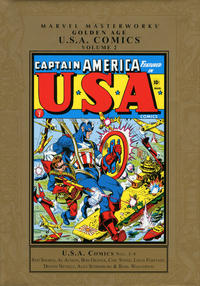 First Line of Dialogue or Text
A special message to the boys and girls of America from Henry Morgenthau, Jr., Secretary of the Treasury
Genre
advocacy
Synopsis
The publishers donated this space, on behalf of the U.S. Savings Bonds and War Stamps campaign, to published a letter from the Secretary of the Treasury, Henry Morgenthau, Jr., encouraging the boys and girls of America to buy at least one 10 cent Savings Stamp each week to help the war effort.
Reprints

Genre
superhero
Characters
Victory Boys [Victor; Maxie Stein; Kurt Erzberger; Gus Weber; Warren Zumwald]; Adolf Hitler; Hirohito; Benito Mussolini; Hitz; Fritz
Synopsis
Hitler and Mussolini need to find a way to hide Germany's difficulties from a visiting Hirohito, so they whisk him off to a castle in the Black Forest. The Victory Boys are nearby, and Maxie is chosen to go hunting for some food for them. He gets captured, and the Victory Boys must confront the three dictators to rescue him.
Reprints

Hills of Horror (Table of Contents: 9)

Genre
adventure
Characters
Jonah Lamb; Mr. Lamb; Budd Powers; Sen Yat
Synopsis
When young Jonah's father dies in an earthquake in Shanghai, Jonah leaves the city to start afresh. He runs into a drifter named Budd Powers, and the two decide to stick together. They run across a village being attacked by bandits, and jump in on the side of the villagers, eventually running the bandits off.
Reprints

Genre
adventure; humor
Characters
Fighting Hobo [Butch Brogan]; Mrs. Upsnoot
Synopsis
Butch Brogan, a hobo, finds a book of Shakespeare and feels inspired by it, although his fellow hobos mock him. When he sees a dog kidnapped from a woman for ransom, he volunteers to chase after them and retrieve it.
Reprints

[Sandai and the Atom Smasher] (Table of Contents: 11)

Genre
superhero
Characters
Blue Blade; Nita; Sandai
Synopsis
The Blue Blade heads to the Pacific coast as a result of the Japanese joining the war. Once there, he saves an inventor and his daughter from Japanese spies who were trying to steal his atomic smashing machine.
Reprints

Genre
adventure
Characters
Pete Lawson; Sheriff McKinley; Andy Cramer
Synopsis
The death of an experienced explosives expert in a mountainous area teeming with gold leads Pete Lawson to suspect Andy Cramer, who has been wanting to buy out the claim once held by Prentiss.
Reprints

Genre
superhero
Characters
Roko [Lon Crag]; Joe; Menalaos; Mike; Pete; Mr. McClure
Synopsis
Lon Crag sees some other kids reading Captain America Comics at school and wishes he could be that kind of hero. In art class, his teacher compliments him on his painting of Menalaos, and Lon stays after school to complete it. When he is done, the painting comes to life and offers to grant him a wish. When he says the word "Illium", 16-year-old Lon becomes an adult superhero named Roko with "the wisdom of Ulysses, the battle-prowess of Aggamenon [sic] and the invulnerability of Achilles", and with Achilles's weakness as well.
Reprints

[Encounter With a Giant] (Table of Contents: 15)

Genre
adventure
Characters
Gypo; Bobby
Synopsis
Bobby disobeys his mother by going into the forest where he meets Gypo, a giant who tries to scare him. Bobby is unimpressed, and Gypo feels like a failure, even more so when his normal-sized wife shows up and forces him to come home and deal with his pet dragon who is acting up again.
Reprints

Genre
war
Characters
Jeff Dix; Fish Face Friday; Mrs. Dix; Joe Dix
Synopsis
Corporal Jeff Dix's furlough is cut short and he is deployed to Panama. Now a Sergeant, he runs into his old friend Fish Face Friday who is the cook on the ship. While on their way to Panama they are attacked by the Japanese, one of whom runs afoul of Fish Face when he tries to poison the food in the galley.
Reprints

This feature was called "Corporal Dix" in the previous issue.

Genre
superhero
Characters
El Gaucho [Don Caldwell]; Carlos Ramirez; Baron Girbel
Synopsis
Don Caldwell, an exchange student in South America, comes to love his new home and studies the legend of their protector El Gaucho, who died many years ago. An old man hears him speak of this, and gives him El Gaucho's costume to carry on the tradition. After defeating Nazis in South America, Don feels he must return to the U.S. to fight Nazis there, becoming the American Avenger.
Reprints

The Ghost's Gaze of Death! (Table of Contents: 23)

Genre
superhero
Characters
Captain America [Steve Rogers]; Bucky [James Barnes]; Perseus; Medusa; Medusa [Anton Harvey]
Synopsis
A noted scientist explains the mysterious deaths of some workers as the re-appearance of the dreaded snake monster, Medusa, a monster from legend. When Cap and Bucky look into the matter, they discover the Medusa is all too real, but this one uses a compressed air gun loaded with poison-tipped needles to kill!
Reprints

[Origin of the Terror Squad] (Table of Contents: 24)

Death in the Coral Sea (Table of Contents: 26)

Genre
war
Characters
Edward A. Flaherty
Synopsis
The true story of a USN seaman on board the USS Neosho.
Reprints

Genre
humor; military
Characters
Jeep Jones
Synopsis
After the attack on Pearl Harbor, garage mechanic "Jeep" Jones decides to join the Army, and ends up as the General's driver.
Reprints

Genre
war
Characters
Tommy Colt; Bill Gibbs; Foxx; Jake Groman
Synopsis
Tommy is knocked senseless and beat up while on guard duty, but is puzzled when a doctor pulls out a thin sliver of metal from his chin after the attack. His pal, Bill, believes Big Jake is responsible, wanting to steal vital plans from the plant being guarded by Tommy.
Reprints

Genre
superhero
Characters
Whizzer [Robert Frank]; Slow-Motion Jones; Cob; Bruce Keller
Synopsis
The Whizzer goes after a Nazi spy who has shot an FBI agent and is out to work with a Nazi sub to destroy a U.S. convoy at sea.
Reprints

Genre
war
Characters
Jeff Dix; Roden
Synopsis
The Nazis use some unwitting kids to attack a military fort by giving them slingshots and incendiary pebbles!
Reprints

Genre
war
Characters
Lieutenant Doug Johnson; Dave
Synopsis
After seeing a fellow pilot gunned down by the Japanese air force, Lt. Johnson takes to the air after the perpetrator, shoots him down, then takes a Japanese plane up to see if he can locate and help destroy a secret Japanese base.
Reprints

Statement of the Ownership, Management, Circulation, Etc. (Table of Contents: 32)

The Case of the Flying Submarine! (Table of Contents: 35)

This feature is a name change for "G-Man Don Gorman" from Daring Mystery Comics #4 (May 1940).

Genre
superhero
Characters
Marvel Boy [Martin Burns]; Miss Prim; Hercules; von Blubber
Synopsis
Martin is visiting a museum with members of his class, when he is involved in an accident, in which Martin suffers a deep cut which is mixed with an extract of the blood of Hercules, giving him super powers.
Reprints

Genre
humor
Characters
Lester Looseleaf; Cuthbert Cutter; Willie
Synopsis
After being fired from his job as a reporter, Lester decides to write a book, which pans women. Unfortunately for him, women hate women, and all the gals loved his book, and his former editor on the paper bought the rights to the book and serialized it in the newspaper.
Reprints

Genre
humor; detective-mystery
Characters
Disk-Eyes; T. Adenoid Cashkisser; Spider McStrangle
Synopsis
Disk-Eyes must halt the attempts by Spider McStrangle and his boys to commit more robberies to help finance bombs that will be used to blow up machinery.
Reprints

The Case of the Up-To-the-Minute Men! (Table of Contents: 40)

First Line of Dialogue or Text
We find our hero at work drawing up plans...
Genre
military; humor
Characters
Jeep Jones; Otto; Spike
Synopsis
Jeep draws up plans for a new invention that he calls the "Super-Duper Tank", which the General says looks like a meat grinder on wheels.
Reprints

The Invasion of the Killer Beasts! (Table of Contents: 46)

Death Strikes Back! (Table of Contents: 47)

Genre
superhero
Characters
Destroyer [Keen Marlow]; Farrotte; Lamonte; Rouen; Kapitan Brool
Synopsis
The Destroyer is sent on a mission with a vial of a substance that will simulate death, which, when used, will allow the Destroyer to free two French patriots from the dreaded Black Dungeon, where the two await death at the hands of the Gestapo.
Reprints

First Line of Dialogue or Text
What's got Jeep so busy?
Genre
humor; military
Characters
Jeep Jones; Hotso; Notsohotso
Synopsis
Jeep introduces his newest invention, the Jeeplane, a weapon designed to be a morale builder among the troops. But two Japanese spies discover the weapon and steal it, with unforeseen results!
Reprints

Illustrated activity page featuring "The Climbing Ring" and other puzzles.

Two Hundred To One (Table of Contents: 52)

Shot in the Back (Table of Contents: 53)

Genre
superhero
Characters
Whizzer [Jack Robinson]; Slow Motion Jones; Arthur Rone; Frank Rone
Synopsis
An incorrigible thief enters Jack's room and steals a diary from his safe: a diary which contains the secret of the Whizzer's speed! And the thief uses it to get revenge on his brother, who is a Policeman.
Reprints

Diamonds For Victory! (Table of Contents: 55)

Genre
superhero
Characters
Secret Stamp [Roddy Colt]; Mr. Baum; Miss Conroy; Hans; Herr Chief
Synopsis
Roddy and his pals at A.W.V.S. are out collecting scrap material for the war drive when they come across an old safe that is full of black diamonds!
Reprints

Genre
war
Characters
Jeff Dix; Sergeant Maloney; Ferdinand Jones
Synopsis
Dix is given the chore of drillin a squad of men who are less than the soldiers they are supposed to be, unaware that one of them is a Fifth Columnist, who has been sent undercover to undermine morale.
Reprints