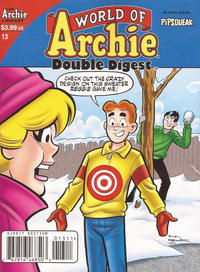 This is a sequel to the story "Battle of the Bots" from Jughead Double Digest #158.

Credits from the index of the original printing. There are no credits listed in this digest.

First Line of Dialogue or Text
I hear you --- I hear you!
Genre
humor; teen
Characters
Veronica Lodge; Archie Andrews
Synopsis
Veronica will let Archie in the house and out of the rain as soon as a commercial comes on the TV.
Reprints

This is a series of 3 two-panel gags, all under the same title.

Genre
humor; teen
Characters
Archie Andrews; Jughead Jones; Reggie Mantle
Synopsis
Archie and Jughead have their times messed up, Helen should have brought an umbrella and Reggie has more fun not dancing.

This illustration is from the cover of The Adventures of Pipsqueak (Archie, 1959 series) #39 with a new masthead.

The Helping Hand Part I (Table of Contents: 30)

Genre
humor; teen
Characters
Betty Cooper; Archie Andrews; Alice Cooper; Miss Grundy; Mr. Flutesnoot
Synopsis
Archie buys what he thinks is one of Betty's pies at the school bake sale, then tries to return it when he finds out it isn't Betty's.
Reprints

Illustration used as the title page of the next section featuring Josie reprints.

Genre
humor
Characters
Josie; Albert; Alexander Cabot III; Alexandra Cabot
Synopsis
After Josie foils Alexandra's latest attempt to kidnap Albert, Alex gives her and Albert a car which he and Alexandra can control by remote, and gets the two of them trapped on the Cabots' island.
Reprints

Genre
humor
Characters
Josie; Melody; Pepper; Alexander Cabot III; Nails McGurk; Spider Webb
Synopsis
Alex is held up by two thugs, but he doesn't have any money on him. Embarrassed at the thought of a Cabot not having money, he insists that the thieves come back to his house so they can steal something.
Reprints

Genre
humor
Characters
Melody; Pepper; Alexander Cabot III; Sock
Synopsis
The school has a sock hop where girls dance with the owner of whichever pair of shoes they grab. Melody tries to arrange for Sock to have unusual shoes so he and Pepper will be able to dance together.
Reprints

First Line of Dialogue or Text
Archie's got a roving eye!
Genre
humor; teen
Characters
Archie Andrews; Betty Cooper; Jughead Jones
Synopsis
Archie can't help looking at the other girls while on a date with Betty.

The Homing Pigeon (Table of Contents: 45)

That Stinks (Table of Contents: 48)

The Meddler (Table of Contents: 52)