The Handbook of the Conan Universe #1 [Newsstand]
(January 1986)

Official Handbook of the Conan Universe (Table of Contents) 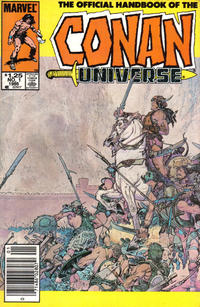 [Aesgaard to Zingara] (Table of Contents: 2)

Genre
fantasy-supernatural; sword and sorcery
Characters
Conan and friends
Synopsis
Encylopedia style entries for the peoples and places of the world of Conan the Barbarian.
Reprints