This issue is a variant of All Winners Comics 70th Anniversary Special (Marvel, 2009 series) #1.

Join Marvel's Finest As They Face the Haunting Hordes of Horror!! (Table of Contents) 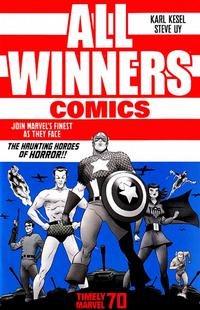 This page contains the indicia and credits for this issue with an accompanying illustration.

Winners All (Table of Contents: 4)

The Four Trials of Justice (Table of Contents: 6)