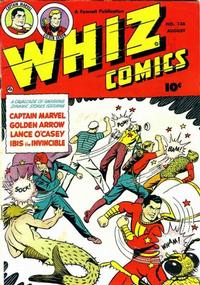 Captain Marvel and His Headache of Horrors (Table of Contents: 1)

The Sargasso Trap (Table of Contents: 3)

The Underwater Rebellion (Table of Contents: 4)

The artwork is very similar to signed Walter Palais stories in Planet Comics (Fiction House, 1940 series) #53, like hands, faces and figure movement, and inking of muscle.

The Birdmen (Table of Contents: 5)

Moreira and Cataldo can often be hard to keep apart at this time. Compare the rather stiff movement of figures, pointed hat brims in sideview, and the horses with his signed story "Lefty Jim-U.S. Marshal" in Crown Comics (McCombs, 1946 series) #16.

How to Shine Your Shoes (Table of Contents: 6)