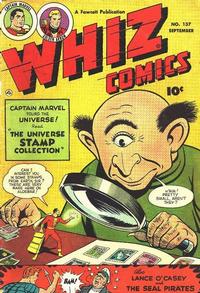 The Mad Machine (Table of Contents: 2)

The Seal Pirates (Table of Contents: 3)

Artwork identical to the previous issue.

Genre
western-frontier; superhero
Characters
Golden Arrow; White Wind (horse); Bull Jeffer's Gang; Tex Lehigh
Synopsis
Bull's gang has sprung him from jail, and Golden Arrow has got a plan to smoke him out from hiding.

The Termite Men (Table of Contents: 6)

The artwork is very similar to signed Walter Palais stories in Planet Comics (Fiction House, 1940) #53, like hands, faces, lines inside the ears, and figure movement, and inking of muscles, and it is very probably his work.