First Line of Dialogue or Text
Though the world may mock Peter Parker, the timid teenager... it will soon marvel at the awesome might of... Spider-Man!
Genre
superhero
Characters
Spider-Man [Peter Parker]
Reprints

Though some people believe that the other person on the cover is "the Burglar," there is no resemblance to the character depicted in the interior story, and no indication on the cover that it is the same character. 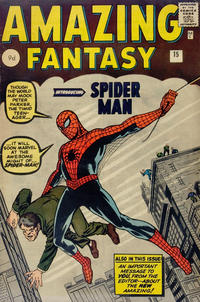 This story is divided into two untitled parts (6 pp, 5 pp).

This is the first Spider-Man story published, the Burglar has never been definitively named.

The Bell-Ringer! (Table of Contents: 5)

Job Number
V-792
First Line of Dialogue or Text
This is the way this little tale was told to us...
Genre
fantasy-supernatural
Characters
Old Pedros
Synopsis
On a small Mediterranean island of fisherfolk, Old Pedros is the town bell-ringer. One day the volcano atop the island begins to erupt. The villagers evacuate and put out to sea. Old Pedros, though, stays at the church. "The bells must be rung," he tells himself. "Someone will hear. For centuries someone has always heard!" Molten rock streams toward the church. Before it reaches Old Pedros, a ray of sunlight surrounds him. The superstitious villagers swear they saw him ride that ray into the sky. Did their eyes play tricks on them, or did Someone hear the bells?
Reprints

Save Hundred of Dollars… (Table of Contents: 7) (Expand) /

Man in the Mummy Case! (Table of Contents: 8)

Job Number
V-791
First Line of Dialogue or Text
A mummy case might seem to be as good a place as any to hide in!
Genre
horror-suspense
Characters
Rocco Rank
Synopsis
A fugitive accepts a mummy's help to escape the police, only to find himself an ancient Egyptian slave.
Reprints
Keywords
museum

Important Announcement from the Editor! (Table of Contents: 11)

First Line of Dialogue or Text
You will notice that the format of AMAZING has been changed.
Reprints

Stan Lee's editorial explains: "We are omitting the word ADULT from our masthead. A number of our teen-age readers have written to say that it makes them feel a bit awkward to buy a magazine which seems to be written exclusively for older readers."

Lee also explained the new feature: "..The SPIDERMAN, who will appear every month in AMAZING. Perhaps, if your letters request it, we will make his stories even longer, or have TWO Spiderman stories per issue."

Based on job numbers researched by Will Murray, the stories that appeared in Amazing Spider-Man #'s-2 were likely prepared for the next issues of Amazing Fantasy. Publisher Martin Goodman cancelled the title before sales figures came in and immediately reinstated Spider-Man in a title of his own when he discovered how well the issue sold.

There Are Martians among Us! (Table of Contents: 13)

Job Number
V-790
First Line of Dialogue or Text
The problem was... how to find the Martians??
Genre
science fiction
Synopsis
The discovery of a crashed flying saucer frightens a small town, especially when the townspeople realize that the Martians are among them. A month goes by with the aliens still at large. A man leaves for the city and tells his wife to stay in the house where she is safe. Later that day, though, she has to go to the store for coffee. On her way home she is captured! When her husband gets home and finds her missing, he makes a desperate phone call ... to another Martian, who like him must have four arms.
Reprints
Keywords
bloodhounds; spaceship

Now! Everything You Need to Start Your Valuable Stamp Collection! (Table of Contents: 14) (Expand) /