Werner Roth inset taken from the cover of Apache Kid # 7. 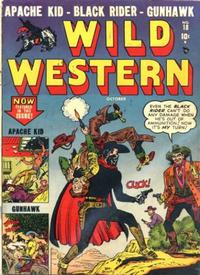 The Secret of the Apache Kid! (Table of Contents: 1)

Job Number
8786
Genre
western-frontier
Characters
Apache Kid; Nellie Green; Captain Bill Gregory; Red Hawk; Corporal Tim; Nightwind
Synopsis
Nellie learns the Apache Kid and Aloysius Kare are the same person and tries to blackmail the kid into helping her with a smuggling operation, but he calls in Captain Gregory. As the Kid struggles with Nellie's wagon it goes over a cliff with Nellie, killing her.
Keywords
Copper Canyon; Madison

Thunder Below the Border! (Table of Contents: 2)

Kid Colt illustration, not in story

The Murderers of Crippled Bend! (Table of Contents: 5)

Job Number
8754
Genre
western-frontier
Characters
Black Rider; Tod Rancer; Sandy; Thompson; Carerro; Nick Kelway; Jed Pinkham; Eve Calhoon; Satan (horse)
Synopsis
Silver is found on Eve's ranch and her foreman Tod is trying to get it on behalf of his backers, including Thompson and Carerro. After Tod is killed the Black Rider discovers the supposed US Marshal Kelway who 'infiltrated' the gang is actually the gang leader and exposes him.
Keywords
Colorado; Crippled Bend