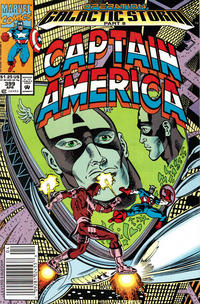 First Line of Dialogue or Text
Hala, homeworld of the star-spanning Kree Empire...
Genre
superhero
Characters
The Avengers [Captain America [Steve Rogers]; Black Knight [Dane Whitman]; Goliath [Clint Barton]; Iron Man [Tony Stark]; Sersi; Crystal; Hercules]; Kree; Shatterax; Ronan; Ultimus [Demon Druid]; Korath the Pursuer; Supremor
Synopsis
Cap and the Avengers have been captured and brought to the Kree homeworld. Sersi disguises them as Accusers, and they escape their captors. Iron Man is upset about having his armor messed with and flies off to locate the central government building with Goliath in tow. The rest of the Avengers try to make their way to the building but are attacked by Korath.
Reprints
Keywords
Operation Galactic Storm

Cross to Bear (Table of Contents: 3)

Genre
superhero
Characters
Diamondback [Rachel Leighton]; Crossbones; Mudsharks [Mug; Rip; Rob; Coleman] (introduction, death)
Synopsis
Bones leaves Diamondback chained up in the subway to go and get some food, but she is attacked by a violent gang.