This issue is a variant of New Mutants (Marvel, 2009 series) #13 [Granov Cover]. There exist further variants: 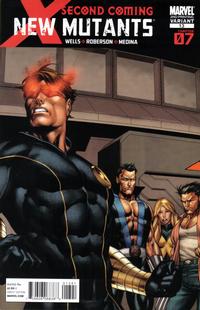 Genre
superhero
Characters
New Mutants [Cannonball; Warlock; Cypher [Doug Ramsey]; Sunspot; Mirage [Dani Moonstar]; Magma]; Hope Summers; Cable; X-Men [Cyclops; Beast; Wolverine; Iceman; Namor, the Sub-Mariner; Hellion; Rockslide; Gentle; Anole; Elixir; Bling; Mercury; Match; Trance]; X-Force [Archangel; X-23; Domino; Vanisher]; X-Club [Box [Madison Jeffries]; Dr. Kavita Rao; Dr. Nemesis]; Bastion (villain); Steven Lang (villain); Donald Pierce (villain)
Synopsis
The New Mutants return from their run-in with Hodge with Karma badly injured and Warlock shaken up. When Vanisher learns that Bastion is taking out all of the X-Men's teleporters, he deserts the team but is still taken out by Lang and his forces. With all of the teleporters out of Utopia, Bastion has Pierce destroy the blackbird to trap the X-Men on the island. The X-Club investigates Bastion's oil rig only to discover it is a trap. After a violent altercation with Dani, Hope tells Cable that she lied when she said she was ready to come to the present and meet the X-Men.
Reprints