Speed and Space (Table of Contents) 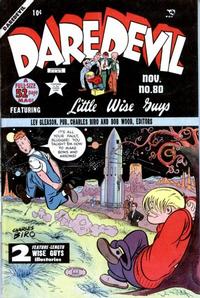 Speed and Space (Table of Contents: 1)

Last appearance of feature and of Hot Rock Flanagan. Art not signed like previous issues, might be Alden McWilliams with another inker.

The Champion Phony (Table of Contents: 5)

Genre
animal
Synopsis
"The story of a young deer and his courage in defending the doe of his choice!"

At bottom of last page there is a note that says "Beginning with the next issue of Daredevil, Dilly Duncan now appearing in Boy Comics will go through his crazy teen age antics in this magazine! Don't miss it! On your newsstand Oct. 16th!"